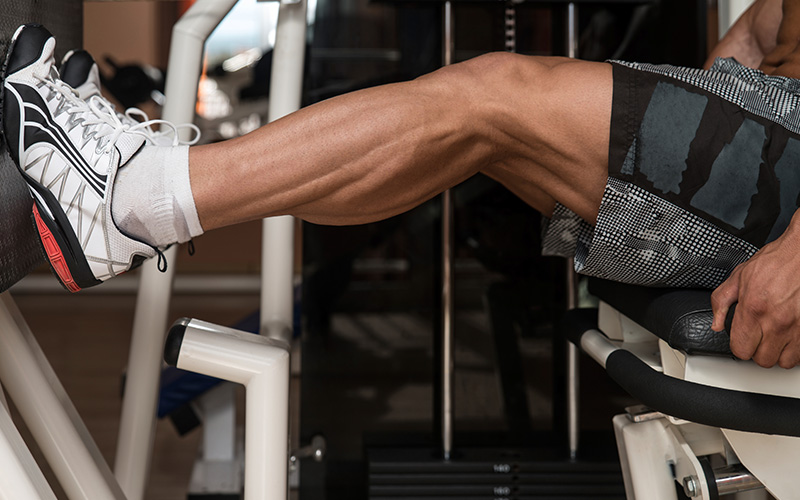 How to Boost Glutathione Levels Naturally

While most people in the gym spend more time working out their chest, arms, shoulders, back, and abs, some of them spend less time training the legs, which include the calves. As a result, some gym goers gain tremendous muscle gains in their upper body, but not in the lower body; thus, some people call them “chicken legs.”

To maintain balance between the upper and the lower body, the following are some exercises that will boost the size and strength of the calves.

The seated calf raise is an isolated strength exercise and one of the top exercises for the calves, according to Muscle and Fitness. As per the publication, the exercise primarily works the soleus part of the calf; thus, it is advisable to do the exercise with high repetitions. The person sits on the machine and places his toes on the lower part of the platform with the heels extending off. Then, the person places his lower thighs under the lever pad, which can be adjusted according to the height of the thighs. After that, the person puts his hands on top of the level pad to prevent it from slipping forward. For the starting position, the lever is raised slightly by pushing the heels up and the safety bar is released. Then, the person inhales as he slightly lowers his heels by bending at the ankles, until the calves are completely stretched. When done, he exhales as he raises the heels by extending the ankles as high as possible as he contracts the calves, holding at the top contraction for at least a second. The movement is done for the recommended number of repetitions.

The standing calf raise is an isolation pushing exercise for the calves, especially the larger outer muscle that gives the shape and size of the calves, as per Dummies. The exercise is done by standing on the edge of a step, with the abdominals pulled in, the balls of the feet planted on the step, and the heels hanging over the edge. Then, the person raises his heels a few inches above the edge of the step so that he is on his tiptoes. He holds this position for a few seconds and then lowers his heels below the platform, feeling a stretch in the calf muscles.

Another variant is standing calf raise with the use of weights attached to a calf raise machine. According to Body Building, the person adjusts the padded lever of the calf raise machine to fit his height. Then, he places his shoulders under the pads provided and positions his toes facing forward and the balls of the feet secured on top of the calf block and the heels extending off it. After that, the person pushes lever up by extending his hips and knees until the torso is erect. It is a good practice that the knees should be maintained with a slight bend and never locked. Also, the toes should be facing forward, outwards, and inwards. The person raises his heels as he exhales by extending the ankles as high as possible while flexing the calf. The position is held for a few seconds before the person starts to go back down. Then, the person inhales as he lowers his heels as he bends the ankles until the calves are stretched.

Also known as calf press and calf raises performed on leg, the leg press calf press is another isolation pushing exercise that works out and develops the calves. According to Body Building, the person sits down on the machine and places his legs on the platform directly in front of him at a medium foot stance. Then, the safety bars are lowered while the platform is pressed all the way up until the legs are fully extended in front of the person. It is important not to lock the knees to prevent injury. For the starting position, the person places his toes and balls of the feet on the lower part of the platform, with the heels extending off. The toes should also be facing either forward, inwards, or outwards. Then, the platform is pressed by raising the heels, extending the ankles, and flexing the calf as high as possible as the person exhales. The contracted position is held by a second prior to going back to the starting position. Then, the person inhales as he lowers his heels and bends the ankles until the calves as stretched.

According to Muscle and Fitness, the calves are some of the “stubborn” muscles of the body and they have to be trained for three times a week in order for them to respond. The routine can also be done for fifteen minutes for three to five days in a week. Focus and pain are elements of effective calf exercise and will boost their growth and development.

Overall, the aforementioned workouts contribute to the development of calf size and strength, but it should be kept in mind that overall gains are achieved through consistent training, proper nutrition, and adequate rest.

Consuming Mango Peels: Reasons Why You Should Give It a Go