34 Reasons Why You Need Hydrogen Peroxide In Your Home 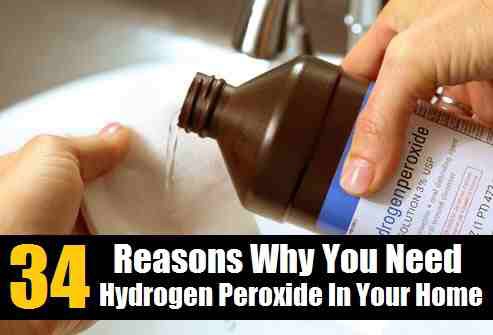 Hydrogen peroxide – chemically represented as H2O2 – is one of the most common household disinfectants in the world. In fact, odds are pretty good that you have a bottle in your medicine cabinet or under your kitchen sink right now. People typically use hydrogen peroxide for sanitizing small cuts and as a whitener for delicate items, however there is much more to this little brown bottle than most of us realize.

Read on to discover 34 reasons why you need hydrogen peroxide in your home.

1. Disinfect Small Wounds
Hydrogen peroxide is a natural anti-septic, therefore one of its most common uses is to clean wounds to prevent infection.

2. Bleach Your Hair
Because it is more gentle than household bleach, hydrogen peroxide is also great for lightening hair.

3. Just Add Highlights
To get a classic “sun-bleached” look, simply spray hydrogen peroxide over damp hair and let it soak in for 10 – 15 minutes before rinsing out.

5. Antiseptic Mouth Rinse
Use a cap full of hydrogen peroxide as a mouth rinse to help whiten teeth and kill germs that cause bad breath.

6. Disinfect Toothbrushes
Soak toothbrushes in hydrogen peroxide to kill staph bacteria and other germs common to the bathroom environment.

7. Whiten Your Nails
Soak fingertips and toes in hydrogen peroxide to naturally whiten your nails.

8. Clear Up Acne
Use hydrogen peroxide as a face rinse to kill the bacteria that cause acne and help clear your complexion. (Or check out these other 11 Natural Ways To Get Rid Of Pimples Fast!)

9. Help Heal Boils
Pour half of a bottle (about 8 ounces) of hydrogen peroxide into warm bath water and soak to treat boils.

13 .Relieve Ear Infections
Put 6 – 8 drop of hydrogen peroxide in each ear to alleviate symptoms and help clear up an ear infection.

14. Kill Sub-dermal Parasites
Apply hydrogen peroxide to skin affected with mites or other parasites to kill them naturally.

17. Whiten Grout
Mix hydrogen peroxide with white flour to create a thick paste. Apply to grout and cover with plastic wrap overnight. The next day, simply rinse with water for whiter grout.

18. Clean Toilet Bowls
Pour about half a cup of hydrogen peroxide into toilet bowls and let it soak for at least 30 minutes to clean and remove stains.

19. Remove Tub Scum
Spray hydrogen peroxide on soap scum, dirt, and stains in the bathtub. Let it sit for at least 30 minutes then rinse to loosen grime and make cleaning easier.

21. Clean Glass Surfaces
Spray hydrogen peroxide on dirty mirrors and other glass surfaces to loosen dirt and grime. Wipe away with a clean, lint-free cloth.

23. Soak Dishrags & Sponges
Drop dirty rags and cleaning sponges into hydrogen peroxide and let them soak for 15 – 30 minutes to disinfect.

24. Disinfect Cutting Boards
Spray hydrogen peroxide on cutting boards to kill germs and bacteria from raw meat and other foods that may have soaked into the surface of the board.

25. Wash Fruits & Vegetables
Spray fruits and veggies with hydrogen peroxide and let soak for a minute or two before rinsing in clean water to remove dirt, wax, and other contaminants.

26. Clean Your Refrigerator
Spray hydrogen peroxide around the inside of your refrigerator and let is soak for a few minutes. Then wipe away with a clean cloth to remove food and disinfect.

(For more kitchen cleaning tips, check out these 80 Mind Blowing Kitchen Hacks That Will Rock Your World!)

Around the House
27. Whiten Laundry
About about a cup of hydrogen peroxide to your wash water and soak fabrics for 15 – 30 minutes to revitalize dingy or yellowed whites.

30. Clean Rugs & Carpets
Spray hydrogen peroxide onto light-colored carpets and rugs to remove stains from mud, food, etc. Just remember that hydrogen peroxide will bleach some fabrics. You may want to test this technique in an inconspicuous area first.

32. Disinfect Lunchboxes
Spray hydrogen peroxide into lunchboxes, coolers, and cooler bags. Let it sit for a few minutes then wipe away to clean and disinfect.

33. Cleanse Dehumidifiers
Add a pint of hydrogen peroxide to one gallon of water and run the solution through humidifiers to disinfect and remove any mold or mildew that may be growing inside.

Diet Tips for Someone Living with Lupus

Cry Me A River: The Psychology and Effects Of Crying