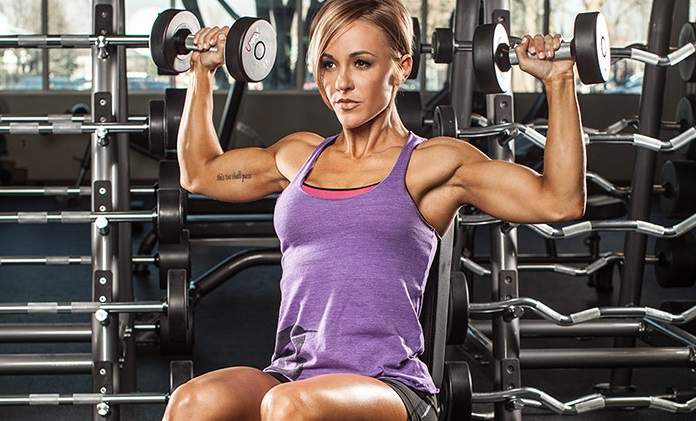 The shoulders help a person in various activities of daily living, such as handling, lifting, or moving objects. In the scene of fitness, the shoulders assist in lifting weights, dumbbells, plates, or one’s own bodyweight. Also, a well-trained shoulder complex helps create a V-tapered body illusion, especially when coupled with a massive back and a narrow waist. The following are some exercises for three-dimensional-looking shoulders.

The person may start by warming up through shoulder circles. According to Men’s Fitness, going into a “hardcore circuit” is not the greatest choice, since the shoulders are considered as a very delicate area; thus, warming up the shoulder is vital.

To perform the exercise, as per the publication, the person starts by getting a five-pound dumbbell in each hand. Next, he raises both dumbbells to his side and performs short shoulder circles in a forward motion. As per the publication, the circumference of the circles should be about six inches. The person completes ten full rotations and rests for 30 seconds, before performing the same exercise in reverse. The exercise is performed in two sets.

An exercise that engages the shoulder complex is the overhead press. To perform the exercise, the person stands with the bar on his front shoulders. Next, he grabs the bar with a narrow grip, straight wrist, vertical forearms, and locked knees and hips. Then, the person raises his chest towards the ceiling by arching his upper back, trying to touch his chin with his upper-chest. After that, he takes a big breath, holds it, and then presses the bar in a vertical line. He should no press it in front or behind his head. Instead, he should press it over his head. Next, the person stays close to the bar while he presses the weight up, shifting his torso forward as the bar passes the forehead. Finally, he holds the bar over his shoulders and mid-foot for balance, locking his elbows and shrugging his shoulders to the ceiling.

Most chest exercises, such as the bench and dumbbell presses, engage the front deltoids to a certain extent; however, the front dumbbell raise isolates it. According to Ex Rx, the person grabs dumbbells in both hands. Next, he positions them in front of his upper legs. After that, he raises the dumbbells forward and upward, until the upper arms are above horizontal. As per the publication, the height of the movement may vary, depending on the range of motion. Also, the range should be limited to height achieved before tension is felt in the shoulder cap.

The side dumbbell raise engages the lateral or medial head of the deltoid, which gives width to the shoulders. According to Muscle and Fitness, the person stands in a shoulder-width stance and grabs a pair of dumbbells, with his palms facing forward and hanging at the sides. Then, he raises his arms out to his sides until they are at shoulder level. After a brief pause, the person lowers the weights back to the starting position.

The face pull is one of the best shoulder exercises that engage the rear deltoids at the back part of the shoulder complex. According to Body Building, the person faces a high pulley with a rope or handles attached. Then, he pulls the weight directly towards his face, with the hands separating as the movement is done. As per the publication, a good practice is to keep the upper arms parallel to the ground.