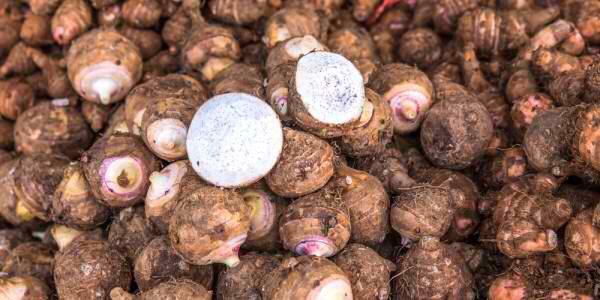 Taro root is a starchy root vegetable native of South India and Southeast Asia, and has been a staple in these regions as far back as 5000 BC. At present, this vegetable is grown in many areas of the world including Asia, West Africa, South America, Central America, the Caribbean and the Polynesian islands.

Taro root can be used as an alternative to a potato, although it has a somewhat nutty flavor when cooked.  It has a dark, hairy skin, similar to that of a coconut, and a moist white root inside. Taro root can be boiled, steamed, fried, roasted, or baked. They can be used in soups and stews or as an accompaniment to meat dishes.

The taro root is a low-calorie vegetable packed with nutritional benefits. Below are some reasons why you should include this in your diet.

Taro root may contain more calories than spinach or broccoli, but it’s still a low-calorie vegetable altogether. Taro root will give you 60 calories for every one-half cup serving. Most of these calories come from carbohydrates.

As a starchy vegetable, taro root contains more carbohydrates than most vegetables. However, its carbohydrate content comes from starches and fiber, making you to feel full longer. A one-half cup serving of raw taro root provides 14g of carbohydrates, 2g of which comes from fiber or 8% of the recommended dietary allowance for fiber.

If you’re a vegetarian, taro root won’t be very useful to you as a protein source. For every one-half cup serving, taro root can only supply you with 1g of protein.  This goes the same for fat because this vegetable is virtually fat-free.

Taro root contains nearly negligible amounts of sodium—just 5mg for every one-half cup serving. This is a long way from the recommended dietary allowance of 2,300mg for healthy adults. Nevertheless, this is ideal for weight watchers as sodium induces water retention, and therefore, weight gain.

Taro root is rich in potassium, containing as much as 310mg or 9% of the recommended dietary allowance for every one-half cup serving. Potassium is an important mineral needed for the proper function of all cells, tissues, and organs in the body. It is also rich in manganese, a mineral that is needed by various enzymes working throughout the body, and vitamin B6, which is involved in the breakdown of protein, fat and carbs for energy.

READ  Things to Do When a Panic Attack Strikes
READ  Important Matters You Need to Know About Expired Make-Ups
Previous article5 Wonderful benefits of Sunflower seeds
Next article17 Amazing Benefits of Guava Leaves for Skin, Hair and Health