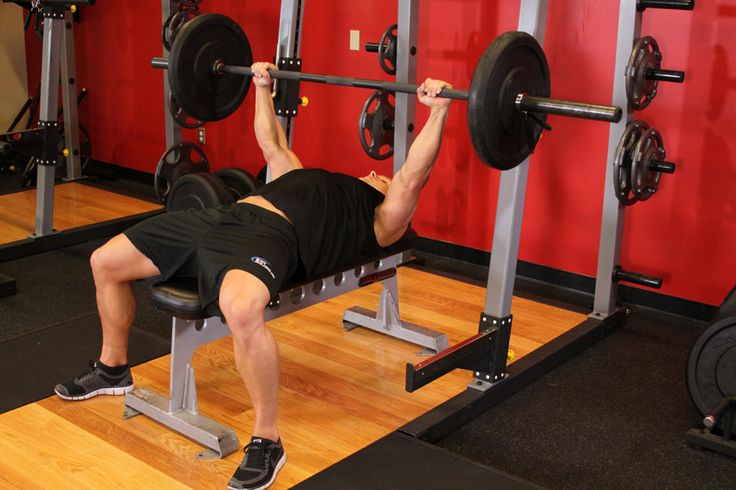 Foods that Cause Body Odor

The following are the big three compound exercises a person should consider including in his routine in the gym.

Aside from one of the most favorite routine by body builders, the barbell bench press also stands as the best compound exercise for the upper body, according to Body Building. With the use of weighted barbell, the bench press primarily targets the chest, but it also engages the shoulders and the triceps.

To execute the bench press, the person lies back on a flat bench. Then, using a medium width grip, the person lifts the bar from the rack and holds it straight over him with his arms locked; this serves as the starting position. When ready, the person inhales and slowly lowers the bar until it touches the middle chest. After that, the person pauses briefly and the exhales while pushing the bar back to the starting position. A good practice here is to concentrate on pushing the weight using the chest muscles. The arms are locked and the chest is squeezed in the contracted position at the top of the movement. Then, the person holds for a second and begins lowering the weight again. A key point is to lower the weight for a twice as long as raising it. The movement is done for the recommended number of repetitions.

According to Health Guidance, the squat stands as one of the most punishing routines in the gym, as it primarily targets the legs, along with the back and the shoulders. Known as the barbell full squat, the routine is a compound pushing exercise that also trains the strength of the quadriceps, hamstrings, calves, and gluteal muscles.

To perform the routine, the person sets up the barbell supported on top of the trapezius (traps), with the chest up and the head facing forward. Then, the person assumes a hip-width stance with the feet turned out as necessary. Once ready, the person lowers down by flexing his knees. A good practice is not moving the hips back as much as possible. It is also made sure that the knees are aligned with the feet while keeping the torso as upright as possible; this maintains balance throughout the routine. Then, the person continues all his way down, with the weight kept on the front of the heel. As the upper legs contact, the lower legs drive the weight up to reverse the motion.

As per Men’s Fitness, the deadlift serves as one of the three most powerful workout moves, in addition to the bench press and the squat. It is a compound pulling sexercise that primarily develops the strength of the hamstrings, although it also engages the lower back, the calves, and the glutes.

In performing the exercise, the person approaches the bar so that it is centered over the feet, which should be about hip-width in distance. Then, the person grips the bar by bending at the hip at shoulder-width, letting the shoulder blades to protract. Once the feet and the grip are ready, the person inhales and then lowers his hips and flexes his knees until his shins touches the bar. A good practice is with the head facing forward instead of downward. Also, the chest is kept as the heels drive to move the weight upward. Once the bar passes the knees, the person pulls the bar back, with the shoulder blades pulled together and the hips driven forward into the bar. Finally, the person bends at the hips and slowly lowers the bar.

Overall, compound exercises contribute to the development of one’s physique, as they involve other muscle groups, more than what isolated routines can do. While both types of exercise have their own goals, muscle development is best achieved through consistent training, proper nutrition, and adequate rest.

5 Simple Tips to a Longer and Happy Life

Centering on Your Core Muscles — Why Strengthen Them and How

A Quick Look at Polycystic Kidney Disease and Its Various Treatments