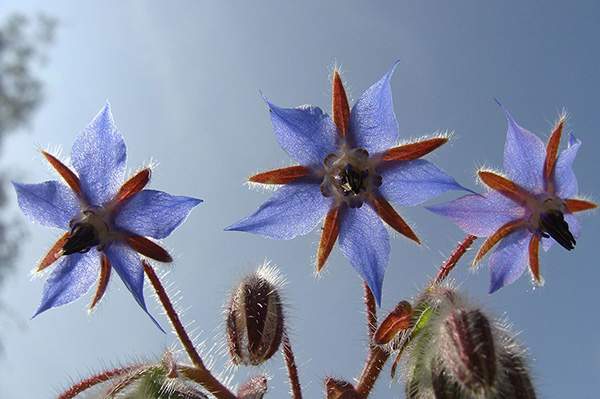 Borage, also known as starflower, is one of the commonly herbs used today. With the scientific name Borago officinalis, the herb belongs in the flowering plant family Boragionaceae. It is common in the Mediterranean territories and it is grown for its leaves and flowers. As an herb, the following are its health benefits.

Borage is rich in vitamins and minerals. According to Nutrition and You, borage contains vitamins A, B, and C. Vitamin A is great for vision and the integrity of the skin and the mucus membranes. On the other hand, vitamin B promotes the functions of the brain, which include learning, thinking, memory, and sensation. Then, vitamin C boosts the body’s defenses against sickness and infection. It also promotes the function of the substance collagen, which acts as cement and connects loosely attached cells and tissues. In terms of minerals, borage contains sodium and potassium, which promote fluid balance in the body; calcium, which strengthens the bones and teeth; copper and manganese for metabolism, cellular growth and development; iron for oxygenation; magnesium for neuromuscular coordination; and zinc for digestive health and wound healing.

Borage also prevents inflammation. According to Dr. Axe’s official website, borage contains a form of polyunsaturated fatty acid called GLA. As per the publication, it has a positive impact on the body, which covers anti-inflammatory and anti-aging properties. Also, it has omega-3 and omega-6, which also have anti-inflammatory mechanisms, along with cardiovascular protective properties.

Borage as a Sedative

Borage also helps a person to be calm. According to Herb Wisdom, the herb has soothing properties and it has been utilized in the management of various nervous conditions, such as anxiety, depression, and mood swings. In this regard, borage can be used by people who feel nervous, as well as people who have their menstrual and menopausal periods.

To prepare, as per the publication, the Pollock is sprinkled with a little sea salt and is wrapped in cling film, before it is placed in the refrigerator for two hours. Then, the oven is preheated to 190 degrees Celsius. The fish is rinsed and is pat dry. After that, it is cut into four portions and is placed to an ovenproof dish, which is lined with a piece of greaseproof paper. Once done, the shallots, thyme, and peppercorns are placed into a saucepan, along with the vinegar and white wine. They are simmered over medium heat until they are reduced to a glaze.

Next, the double cream is added and is brought to a boil. Then, heat is reduced and 150 grams of the butter is gradually whisked. The food is seasoned with salt and ground black pepper, and is kept warm. Also, a knob of butter is placed on the portions of the Pollock, before it is place in the oven for three minutes. Once done, the fish is basted with the melted butter and is returned to the oven for another three to four minutes, until it becomes cooked. Meanwhile, the radishes are wilted down on a frying pan with a little butter and sea salt. They are set aside and are kept warm. A frying pan is also heated until hot and the remaining butter is added, along with the girolles and water. The food is cooked until the mushrooms become soft.

Once the fish is cooked, the butter sauce is spooned onto the warmed serving plates. Also, the radishes are added and the fish is placed on top. The girolles are also added and some lardo slices are placed on top. Finally, the borage flowers are used as garnish before serving.

Borage is considered one of the healthy food ingredients, due to its nutritional contents. Thus, its inclusion in various meal recipes will help boost a person’s health and wellness.