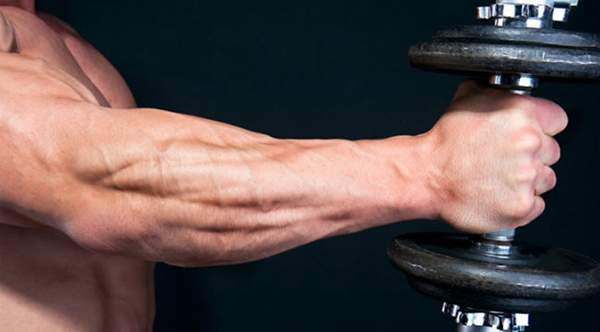 The forearms are just like the legs’ calves, they are sometimes forgotten during training. While many people at the gym concentrate on their chest, shoulders, biceps, arms, back, legs, and abs, the forearms also deserve an isolated workout. The following are some exercises that will boost the size and mass of the forearms.

Forearm rolls is one of the best exercises for the forearms. According to Body Building, the person uses a power-cage and sets the bars so that the barbell is inches under the fists. Then, he stands with a shoulder-wide stance, with knees mildly bent and abdominals contracted. Next, he grabs and holds the bar behind his back and ensures that the shoulders are kept in a natural and relaxed position. After that, the person allows the bar to roll down as fast towards his fingertips as possible, without losing the grip to the bar. At the end of the roll, he makes a turn and rolls the bar back up until the fists are totally  clenched around the bar again. The routine is continued by flexing the wrists back and up, with focus on contracting or squeezing the bottom part of the forearms.

Another exercise for the forearms is the farmer’s carry. As per Muscle and Fitness, it is a vital exercise to build the forearms’ power and grip. Since it also engages the core, farmer’s carry also enhances the strength and tone of the abdominal muscles, in addition to the stability of the shoulder complex. According to the publication, the person grabs a heavy dumbbell or kettlebell in each hand and stands tall. Then, he starts walking, with his abdominals kept braced and the chest tall. Also, the shoulders are pulled back at all times. The exercise can be used a warm-up drill to boost the body’s stability. One can do two to three sets for 20 yards or just carry the weights for ten minutes.

The wrist curl is another addition to the forearm-blasting exercises. According to Body Building, the person sits and grabs a loaded bar with a narrow to shoulder-width underhand grip, with the forearms resting on the thighs and the wrists beyond the knees. The person lets the bar to roll out of the palms down to the fingers and grips the bar up and flexes the wrists. Then, he lowers the bar and the does the movement for the planned number of repetitions. As per the publication, the movement should be slow and controlled while going with heavy weights. Also, the exercise is performed for three sets with 15 to 20 repetitions.

See also  Oral Thrush: What It is and How Can It be Remedied at Home?

The dumbbell hammer curl is another exercise for the forearm’s size. According to Ex Rx, the person grabs two dumbbells in each arm and positions them to the sides, with the palms facing in and with the arms straight. Then, with the elbows to the sides, the person lifts one dumbbell until the forearm is vertical and the thumb faces the shoulder. After that, the dumbbell is lowered to the original position and the repeated with the alternate arm.

According to the publication, when the elbows are completely flexed, the biceps can go forward slightly, letting the forearms to be outside vertical. This motions lets the release of muscle tension between repetitions.

Overall, the forearms help a person do various tasks at home, school, or office; thus, making them stronger thru training makes sense. Along with the aforementioned exercises, total forearm development can be achieved through proper nutrition and adequate sleep.

6 Rules to a Stress Free Weekends