The body’s forearms serve as the calves of the upper extremities. Just like other parts of the body, the forearms are also essential because they help a person accomplish various task and activities of daily living, which include eating, taking a bath, and playing. In the realm of health and fitness, the forearms allow people hold and maintain their grip on weights and bars; thus, these body parts contribute to the totality of man’s health.

The forearms should also be trained during workout sessions, according to Breaking Muscles. As per the publication the hands, wrists, and forearms should be in the priority list when it comes to warming up and while working out, since they enable a person to execute exercises that utilize the chest, shoulders, triceps, biceps, and back.

Stretching exercises are vital for the arms to be more capable of doing more complicated weight-bearing exercises that promote muscular development of the forearms. In the exercise, the fingers are flexed and extended while making a full fist for 30 seconds. Then, the person opens and closes his fingers, doing to sets of each for a total of one full minute. When done, the person flexes his wrist and holds in optimal flex for 30 seconds. It should be kept in mind that the elbow is kept straight, but not locked. After that, the wrist is extended, with the elbow straight for half a minute. Two sets are done within two minutes. The aforementioned stretching exercises prepare the forearms for the succeeding forearm exercises.

Anatomically, the forearms consist several muscles like the flexors, which run the length of the inner forearm; the extensors, which allow the hand to extend backward; and the brachioradialis, the upper outer portion of the forearm; thus, the exercises should focus on them. Using a barbell, these muscles can be trained separately.

Barbell wrist curls are done to train the wrist flexors. As per Body Building, the person holds a barbell with both hands, with the palms facing up and hands spaced about shoulder width. Then, the feet are placed flat on the floor, with a distance wider than shoulder width apart. After that, the person leans forward and places his forearms on top of his upper thighs with the palms up. The bar is lowered as far as possible while inhaling and maintaining a tight grip. Then, the bar is curled as high as possible while flexing the forearms and exhaling.

The reverse barbell wrist curls target the wrist extensors. The person holds a barbell with both hands, with the palms facing down and the hands spaced about shoulder width. Then, the feet are placed flat on the floor, with a distance slightly wider than shoulder width apart. The person leans forward and places his forearms on top of the upper thighs with the palms down. Then, the bar is lowered as far a possible while inhaling and keeping a tight grip. After that, the bar is curled up as high as possible while flexing the forearms and exhaling.

Meanwhile, the reverse barbell curls aim for brachioradialis development. The person stands up with his torso upright, while holding a barbell at shoulder width, with the elbows near to the torso and with the palms facing down. Then, the bar is curled while holding the upper arms stationary, contracting the biceps as the person exhales. The movement goes on until the biceps are fully contracted and the bar is at shoulder level. Then, the bar is gradually brought back to starting position as the person breathes in.

The forearms and legs should be trained on a regular basis. While many people complain that their legs and forearms are small like a bird’s, working them out consistently triggers a response and development. 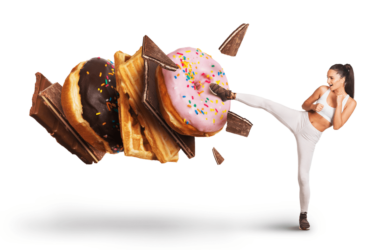 Chew on This to End Cravings Fast

There are a handful of things that you can blame for unnecessary gaining of weight. This article will…

The way buttermilk cookies are called is enough to fill your mouth with saliva instantly. But wait until…