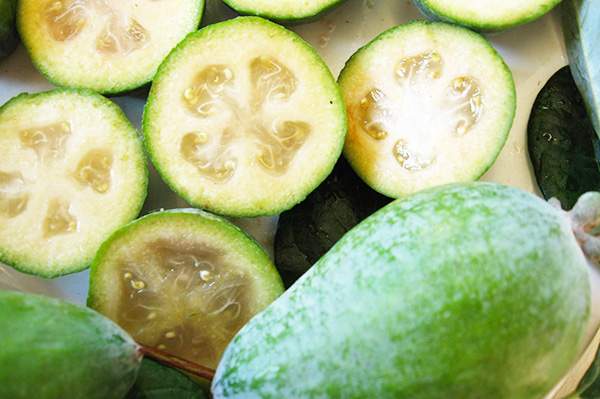 Why You Should Stop Vaping Now

There is a fruit from South America that not only supplies your body with all sorts of nutrients, but also bombards your taste buds with varying delightful flavors. It’s called feijoa, and its flesh and pulp tastes like pineapple and guava rolled into one. Because of its unique flavor, it is also known as “pineapple guava”.

Feijoa comes from a tree having the same name, which is also now being cultivated in other parts of the planet such as North America and New Zealand. The said tree is actually very small, almost resembling a shrub. The fruit it bears is also small, resembling a chicken egg but with green coloration.

Eating feijoa is as simple as cutting it in half and scooping out the flesh as well as pulp. However, it is also commonly added to ice cream, yoghurt and smoothies. By the way, in areas of the planet where feijoa is found abundantly, the fruit is usually turned into jams, jellies, candies and preserves during its season.

Now that you are acquainted with feijoa, it’s time to take a look at its health benefits:

Thanks to the loads of fiber in feijoa, its consumption helps optimize the process of digestion, thus allowing your body to enjoy all of the nutrients found in the food you eat. Fiber found abundantly in feijoa also helps increase the population of friendly bacteria in the gut, which is good for your overall health.

Everyone knows that a diet high in fiber is one of the key components to having regular bowel movement. Since feijoa contains lots of fiber, consuming it helps keep constipation at bay. As a bonus, the regular intake of fiber-rich feijoa can also help lower your risk of hemorrhoids and colon cancer, according to medical experts.

If your blood pressure is off the charts, make sure that you strictly follow the diet and treatment recommendations of your doctor. You may also try consuming feijoa because the fiber it packs sweeps plaque out of the arteries, resulting in the reduction of blood pressure as well as heart disease risk.

READ  Nervous Cough: What It is and How to Deal With It

People with diabetes as well as those who are at risk of the said disease can benefit a lot from the intake of feijoa. Aside from containing only all-natural sugars, the fiber content of feijoa also helps slow down the release of carbs in the bloodstream. As a result, unhealthy and dangerous spikes in glucose levels can be avoided.

The kind of acidic taste of feijoa is a clear sign that it is a wonderful source of vitamin C. As everybody knows, this nutrient is very important for making the immune system strong. Having your immune system strengthened means that you are less likely to be down with the common cold and flu.

Vitamin C in feijoa is also good for keeping the skin young-looking. It’s for the fact that the said vitamin helps increase the production of collagen, a type of protein that wards off unsightly wrinkles and fine lines by making the skin firm. Antioxidants present in feijoa also help beautify the skin by neutralizing free radicals.

One of the many nutrients in every serving of feijoa is folate, which is actually a type of B vitamin. According to medical experts, folate is important for pregnant women as it helps lowering the risk of neural tube defects in babies. In other words, women who are in the family way should include folate-containing feijoa in their diet.

When you come across this exotic fruit, go ahead and purchase some to enjoy the health benefits above. Do come back and kindly share in the comments section below how you find its taste!