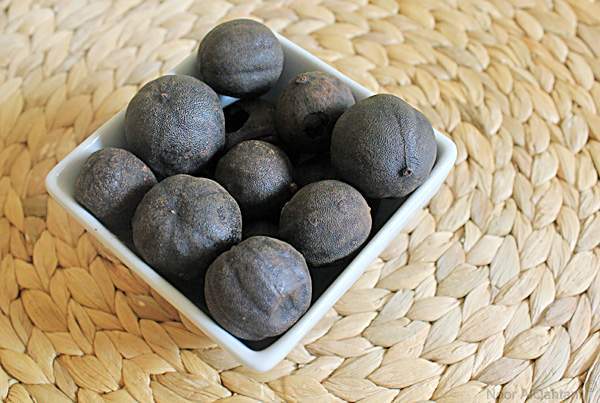 Loomi is the term for dried and blackened lime. Made from ripe limes, they are boiled in salt water and are sun-dried until their inner part becomes dark in color.With its strong and distinct flavor, loomi is used to create a citrus odor plus a sour tinge to meat and legume dishes.

Loomi also helps in the digestive process and conditions like constipation. According to Organic Facts, lime has an aroma that leads the mouth to water or salivate, which helps digest food. Since lime has acid, it also helps break down the food into micro molecules and cleans the digestive tract. Loomi also has flavonoids, which stimulate the digestive system and boost the release of digestive juice, acids, and bile. Also, flvonoids stimulate the peristaltic movement of the gastrointestinal tract; thus, it helps digestive problems like constipation.

Loomi also helps promote cardiovascular health and prevent disorders like cerebrovascular accident or stroke. According to a research published in the journal “ARYA Atherosclerosis,” as per Medical News Today, lime’s skin and juice were able to reduce fatty streaks in the coronary arteries, which lead to plaque formation and accumulation and further result to cardiovascular diseases like coronary artery disease. Also, lime also contains vitamin C, which is linked with a reduced risk of having stroke. Inversely, decreased vitamin C level in the body is correlated with higher risk if developing the said disease. Also, vitamin C raises the body’s defenses against infection and illness.

Loomi, the Eyes, and the Skin

Loomi also improves a person’s vision and integument. According to Medical Daily, lime has antioxidant properties, along with vitamin C. These protect the eyes from aging, in addition to visual disturbances like macular degeneration. Loomi also contains flavonoids, which also safeguard the eyes from infections. To add, the blend of the aforementioned substances also rejuvenates the skin, decreases body odor, and defends it from infection.

Loomi, Asthma, and the Respiratory System

Loomi also promotes respiratory health. According to Medical News Today, Loomi’s vitamin C is associated with a reduced risk of asthma development. Also, it contains flavonoids, which are usually used in anti-congestive medicines like inhalers, vaporizers, and balms. The peel of the lime also provides fast-acting answer for nausea and nasal congestion. Along with loomi, vitamin C is also present in citrus fruits like oranges and lemons.

Loomi can be added to various recipes, such as Loomi Tea. As per Food, the ingredients include eight loomi lemons (crushed), half cup of sugar (or more, to taste), and a gallon of water. To prepare, a gallon of water is added to loomi in a non-reactive pan. Then, it is brought to a boil and is simmered for five minutes. Next, the burner is turned off and allowed to cool. Once done, the tea is drained and the sugar is added. After that, the sugar is dissolved at room temperature. The liquid is stirred and sugar is added to taste, before chilling. Finally, the tea is chilled with ice cubes.

See also  Korean Home Remedies for the Cold and Flu

As per the publication, the loomi soaking can be left in a gallon of water overnight. Then, it is brought to a boil in the morning. The heat is turned off and the strained, before adding sugar. The loomi can also crushed into small pieces with a mortar and pestle, which brings out the flavor and sourness

Loomi is one of the healthy herbs and spices. Its addition to various meal recipes will help promote a person’s total health and well-being.

Comments
Sourceyasalamcooking.com
Previous articleTips on How to Achieve Smoother Skin
Next articleBeat Snoring with Natural Remedies

Hepatitis A: How do we prevent from acquiring this?