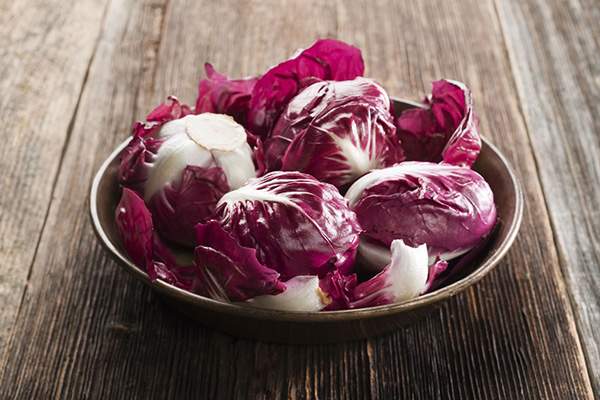 Foods to Avoid If You’re Trying to Get Pregnant

Radicchio, also known as Italian chicory or leaf chicory, is a leaf vegetable with white-veined red leaves. With the scientific name Cichorium intybus, the vegetable has a bitter and spicy taste, which lifts when it is roasted or grilled. As a plant, radicchio has multiple benefits to health.

Radicchio is packed with vitamins and minerals. According to Nutrition and You, the vegetable contains vitamins A, C, E, and K. vitamin A is great for vision, as well as the integrity of the skin and mucus membranes. Vitamin C, on the other hand, promotes the function of the immune system, which defends the body from agents that cause infection and illness. Vitamin E promotes the health of the skin and it shares antioxidant properties with vitamin A, which lets them help the body eliminate toxins and free radicals. Meanwhile, vitamin K promotes blood clotting, which then boosts wound healing and prevents fluid loss.

In terms of minerals, radicchio contains sodium, potassium, calcium, phosphorus, copper, manganese, iron, magnesium, zinc, and selenium. Sodium and potassium work hand in hand in maintaining the body’s fluid balance. Potassium also promotes cardiovascular health through preventing hypertension by relaxing the muscles of the blood vessels. Calcium and phosphorus, on the other hand, work together to boost the health of the bones and teeth. Copper and manganese both play a role in the metabolic process and growth and development of cells and tissues. Iron boosts the oxygenation of cells and tissues while magnesium is responsible for the health of the neuromuscular system. Zinc promotes digestive health and wound healing while selenium prevents cellular damage by generating antioxidant enzymes.

Radicchio also plays a role in diabetes management. As per Organic Gardening News and Info, the plant contains the substance inulin, a natural agent that helps in blood sugar level regulation. As per the publication, the substance is associated with a decreased in the risk of having stroke and other heart ailments. Also, radicchio has substances that neutralize free radicals in the body and fight cell damage to the DNA, which may lead to diabetes, as well as coronary heart disease, and cancer.

READ  Meals For A Lean Body

Radicchio also helps reduce the person’s blood pressure. According to Dove Med, the vegetable contains quertecin, ellagic acid, and lycopene; these are phytonutrients that are capable of reducing systolic blood pressure, the arterial pressure during heart contraction. As per the publication, radicchio’s potassium also contributes to the prevention of high blood pressire by relaxing the blood vessels while maintaining proper blood circulation.

READ  What You Need to Know About Thin Endometrial Lining

Radicchio also promotes the metabolic process. Along with copper and manganese, the vegetable also facilitates proper bile production, as per Health Benefits of Eating. According to the publication, bile helps in the breakdown of amino acids, fats, and cholesterol, into smaller substances that can be easily used by the body.

Radicchio can be added to several meal recipes, which include Sauteed Radicchio with Honey and Balsamic Vinegar. According to Martha Steweart, the ingredients include two heads radicchio (cored, torn into bite-size pieces), a tablespoon of extra-virgin olive oil, two tablespoons balsamic vinegar, one tablespoon honey, salt, and pepper.

To prepare, as per the publication, the person rinses radicchio, leaving some water to the leaves. Then, oil is heated over medium-high in a large skillet. Next, radicchio is added and seasoned with salt and pepper. After that, it is cooked and tossed for about four minutes, until it becomes tender. Finally, honey and vinegar are added and stirred to combine.

Calm Your Mind with These 10 Hobbies

6 Surprising Ways to Avoid Getting Sick This Year