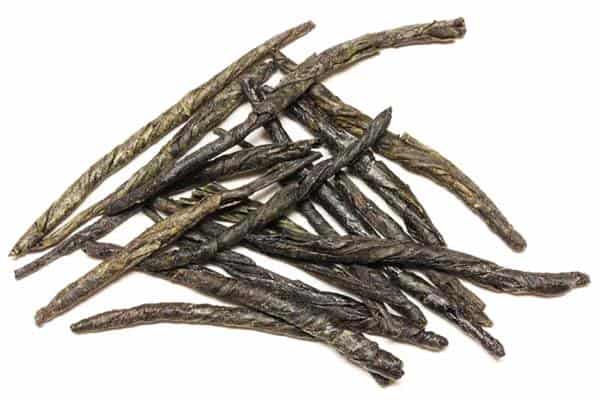 Kuding is a plant that is native to China. Its leaves are rolled up into needle-like shapes and they are dunked in hot water for making tea. In this article, we will learn more about kuding tea.

Because of the way the kuding leaves are rolled up, kuding tea is sometimes referred to as needle kuding tea. All you have to do in order to brew a cup of it is allow 3 to 4 kuding leaves to steep in a cup of hot water. However, it is a good idea for you to use an infuser because, otherwise, the resulting kuding tea may be on the bitter side.

Actually, it is said that kuding leaves have been used for medicinal purposes in China for over 2,000 years now. These days, those leaves are more commonly used for making kuding tea.

There are many different perks that is offered by a cup of kuding tea. However, there is one problem with it, and that’s the fact that it contains a small amount of caffeine. For individuals who are sensitive to caffeine and develop all sorts of unfavorable symptoms after ingesting the said substance, drinking a cup of kuding tea may be a bad idea.

Headaches, nausea, lightheadedness, hand tremors, palpitations, diarrhea — these are some of the symptoms you may experience if you have caffeine sensitivity. With such being the case, unfortunately, you should opt for some other herbal teas because kuding tea may only do you more harm than good.

But if the consumption of caffeine is not really a big issue, then go ahead and brew yourself a cup of kuding tea. The regular intake of this Chinese tea is said to offer the following impressive health benefits:

One of the most amazing things that kuding tea can offer is reduced blood pressure, which makes it beneficial for those who are suffering from hypertension. But if you have hypertension and your doctor already gave you medications for lowering your blood pressure, it’s not a good idea for you to consume kuding tea.

Thanks to the loads of antioxidants in every serving of kuding tea, this herbal tea from China is known to help lower bad cholesterol. As a result, regularly taking a cup of it may help in lowering one’s risk of heart disease.

According to traditional Chinese healers, having kuding tea is beneficial for individuals who have diabetes. It’s for the fact that the said tea has the ability to prevent the levels of sugar in the blood from spiking. If your doctor told you that you are at high risk of developing diabetes, you may benefit from kuding tea consumption.

READ  Types of Food Most Likely to Make You Sick

Did you know that a cup of kuding tea is said to help get rid of that pesky body odor? Experts say that this Chinese tea does that by zapping allyl methyl sulfide molecules in the body, which are known to cause malodorous smell. It’s also possible for you to consume kuding tea if you want to have your breath freshened instantly.

One of the many beauty secrets of Chinese women is the intake of kuding tea daily. The said beverage is revered for its ability to fight off acne and many other skin issues. Its antioxidant content also helps delay skin aging.

CAUTION: If you are pregnant or diagnosed with a medical condition, it’s not a good idea for you to consume kuding tea. You should stay away from it if your blood pressure is low as this Chinese tea can make it go lower. Since kuding tea possesses blood-thinning properties, refrain from taking it prior to having surgery or if you are already taking drugs for thinning the blood because excessive bleeding may occur.

Top 6 Biggest Salad Mistakes — and How to Avoid Them