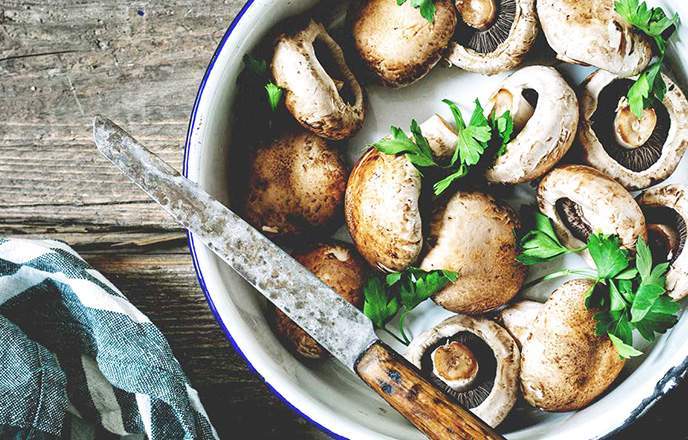 Let’s See the Many Health Benefits of Lassi

Shoulder Workouts that You Need to be Doing

Mushroom is part of the kingdom fungi in biology. While some are poisonous, making them inedible, some can be eaten. In fact, they are added in some dishes for added taste, not to mention the nutrients they have. The following are the health benefits of mushrooms, along with a sample recipe.

One health benefit of mushrooms is the protection of cells from damage. According to Mushroom Info, mushrooms contain selenium, a mineral responsible for safeguarding cells and tissues against oxidative damage from toxins and free radicals. This way, the mineral is capable of protecting the cells from chronic diseases and boosting the functions of the immune system. Aside from selenium, mushrooms also have the antioxidant ergothioneine, which also helps protects the body’s cells from damage and various diseases.

Another health benefit of mushrooms is vitamin D. According to Best Health Magazine, exposing mushrooms to high levels of ultraviolet B prior to being transported to the market enables them to produce vitamin D, also known as ergosterol and sunshine vitamin. It promotes calcium absorption to the bones; hence, it also helps harden and strengthen the bones. As per the publication, adults below 50 years old should consume 400 to 1,000 international of the vitamin daily and Mushrooms Canada CEO William Stevens said that a couple of Canadian produces were already testing the procedure, adding that “high D” mushrooms should be stored in about six months.

Mushrooms also help prevent cancer. According to Medical News Today, mushrooms’ antioxidants help the body get rid of unwanted substances like toxins and free radicals, which contribute to cell damage and cancer development. In addition, the fungi also have folate, which contribute in DNA synthesis and repair.

One recipe that uses mushrooms is Mushroom and Ricotta Bruschette. According to Chef John, as cited by All Recipes, the mushrooms can be cooked while the toasted bread is prepared. The ingredients are 16 large white mushrooms (sliced), one tablespoon olive oil, one tablespoon butter, four slices French bread (toasted), one pinch of red pepper flakes, a pinch of freshly ground blck pepper, half teaspoon salt, one lemon (zested), one egg, one cup ricotta cheese, one-fourth cup of green onions, one-fourth cup of Marsala wine, half cup chicken broth, two teaspoons of lemon juice, two tablespoons of chopped Italian parsley, a tablespoon of butter, and salt and freshly ground black pepper.

To prepare, as per the publication, the oven is preheated to 425 degrees Fahrenheit or 220 degrees Celsius. Then, the ricotta, lemon zest, egg, black pepper, red pepper flakes, and half teaspoon salt are mixed in a bowl until smooth. Next, the toasted bread slices are placed on a baking sheet and sprinkled with a tablespoon of olive oil; the ricotta mixture is divided atop four bread slices. Then, the ingredients are baked in the preheated oven for about 12 minutes until the cheese is brown in color. After that, the butter and olive oil are heated in a large skillet over medium-high heat and the mushrooms are cooked and stirred in the mixture for five to six minutes until brown. The green onions are also cooked and stirred for two to three minutes until softened. The masala wine is stirred into the mixture for about a minute until reduced by half. After that, heat is reduced to medium-low and then chicken stock and lemon juice are added to the skillet and cooked until the liquid has evaporated.

See also  Want a Less-Voluptuous Figure? Shrink Your Breasts by Doing These Exercises!

Mushrooms are considered nutritious, with their many health benefits. Thus, they can easily be added to various meal recipes for various occasions.