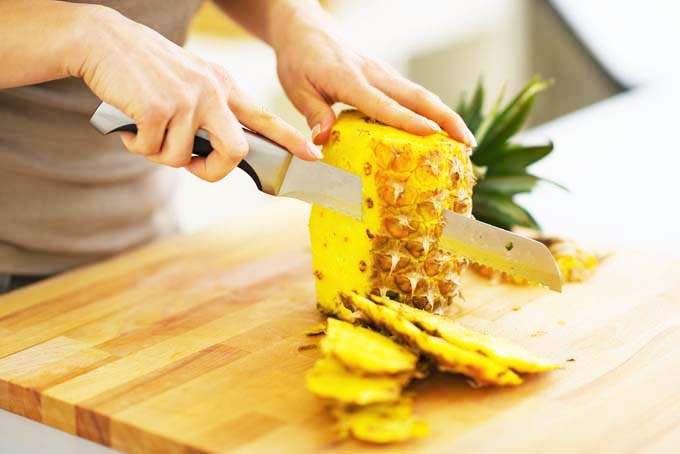 Tips and Tricks for Preparing Meals for the Week

Tired of Carrying Around Those Eye Bags? Read This!

Foods to Avoid If You Have Diarrhea

Pineapple is one of the known tropical fruits people know today. It is an edible multiple fruit that has coalesced berries, which are also called pineapples. Part of the Bromeliaceae family, pineapple is considered one of the most economically significant.

One health benefit of pineapple skin is as a foot scrub. According to Hub Pages, pineapple contains bromelain, which is used to make meat tender. As per the publication, the enzyme helps soften the tough skin of the feet, as if one is giving himself a home pedicure. To prepare the foot scrub, the person just places the pineapple scraps in a food processor or blender and blends them until a coarse paste is formed. Then, the paste is applied to the feet and is left for 20 minutes, prior to rinsing. The pineapple skins may not be chopped, so the fleshy part can be simply rubbed over the skin of the feet in circular motions.

Another health benefit of pineapple skin is the promotion of the digestive process, along with being an anti-parasitic; this means it is capable of safeguarding the body against many parasites. As per Step to Health, pineapple’s bromelain is the enzyme responsible for speeding up the digestive process. In addition, it helps combat intestinal parasites, promotes intestinal function, and prevent constipation and hemorrhoids.

Diuresis or promotion of urination is another remedy of pineapple. According to Style Craze, pineapple serves as a natural diuretic that helps maintain kidney function; they are the organs responsible for the elimination of toxins in the body. Having an adequate urine output rules out dehydration, which indicates lack of fluid in the body. Diuresis also prevents fluid congestion in the body, which places undue stress or workload to the heart. Hence, this mechanic also prevents the development of congestive disorders like congestive heart failure. Moreover, urination also prevents increase in blood pressure or hypertension, which further prevents the development of diseases like coronary artery disease.

See also  How to Lower Creatinine Levels in the Urine Naturally

Pineapple peels also help clean the body and eliminate harmful substances with its antioxidant properties. In order words, the peels help the body get rid of agents like toxins and free radicals. According to Voice, pineapple skin also has anti-inflammatory properties that suppress the inflammatory response, along with improving the body’s defenses through strengthening the immune system. The peels also serve as anticancer, which means it can protect a person and reduce his risk of developing the deadly disease. As per Paul Haider website, pineapple skin tea is a good anticancer agent, which helps slow tumor growth and prevent cancer.

One recipe that uses pineapple peel is Pineapple, Cinnamon, and Ginger Iced Tea. According to Food 52, the ingredients include one pineapple peal, crown, and scraps; cinnamon sticks; and a knob of ginger. As per Step to Health, boiling the pineapple skin is one of the easiest drinks that can be made with the fruit’s skin. According to the publication, the person washes the pineapple well and peels it. Then, the skin is cut in very small pieces and boils them with a liter of water for a medium or large pineapple and is boiled on low heat, covered for 15 to 20 minutes. After that, the pineapple skin is allowed to sit for another five minutes. Once done, the beverage is sweetened with honey or stevia; it can be consumed hot, cold, or fresh made.

The pineapple skin is also beneficial to human health, given its vitamins and helpful properties. Thus, it is feasible to include it in various weekly meal plans for the entire family.