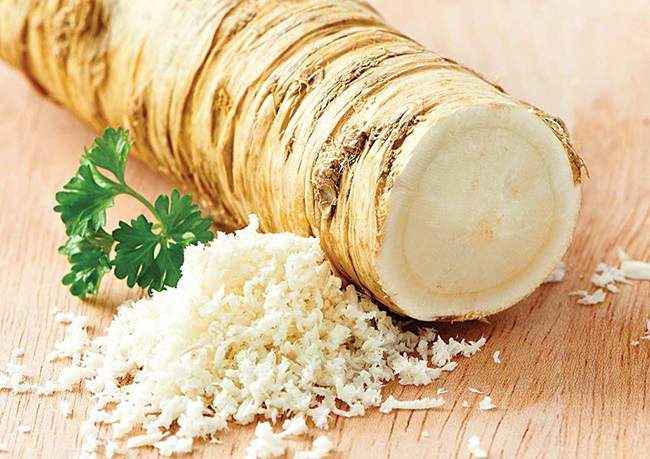 Horseradish, with the scientific name Armoacia rusticana, is a plant from the Brassicaceae family. A relative of broccoli, cabbage, wasabi, and mustard, it is believed to originate from the southeastern part of Europe, as well as in western Asian. Air or heat exposure removes it pungency and become bitter in taste. Despite this, horseradish has several health benefits.

Horseradish is rich in vitamins and minerals. According to Nutrition and You, the plant is high in the water soluble vitamin C, which is also a potent antioxidant. As per the publication, a 100g fresh horseradish root contains 29mg or 41 percent of the recommended daily vitamin intake. It is known that vitamin C is responsible for boosting the immune system and fighting the causes of infection. Also, it helps the body get rid of free radicals, which lead to infection and cancer development.

Aside from vitamin C, horseradish also contains other substances that raise immune system function and prevent cancer. Some of them include isothiocyanate and sinigrin. According to Organic Facts, these substances in horseradish have proven their antioxidant features, which mimic the function and generation of white blood cells or leukocytes, the body’s soldiers. Sinigrin is also an antioxidant glucosinate, which prevents the mutation of healthy cells into cancerous cells, secondary to free radicals in the body.

Horseradish can promote skin health. According to Botanical, an infusion of sliced horseradish in milk serves as a great cosmetic for the skin, with its pungency and sulfur. As per the publication, a mixture of horseradish juice helps remove freckles when applied externally.

Horseradish can also take care of respiratory infections, such as cough. As per Botanical, the vegetable can be used to relieve cough. According to the publication, water can be added to the horseradish mixture to become well diluted. Then, glycerine is also added to make it sweet. It is revealed that the said mixture has the power to yield marked relief in children with pertussis or whooping cough, with one to two spoonsful being consumed at a time. Also, the horseradish syrup has displayed its potency against hoarseness of voice. To prepare, a drachm of the horseradish root is infused in four ounces of water for two hours. Then, twice of its weight is combined with sugar. For the dose, the person consumed a teaspoonful or two.

READ  Foods That Can Strengthen Your Teeth and Bones More Than a Glass of Milk
READ  Because Your Nails Need A Break, Too

In terms of intestinal parasitism, which is common in children, horseradish can also be a remedy.

Horseradish can be included to various meal recipes, such as the Horseradish Cream Sauce. According to Food Network, the ingredients include one-fourth cup off grated fresh horseradish, a cup of sour cream, a tablespoon of Dijon mustard, a teaspoon of white wine vinegar, half teaspoon of kosher salt, and one-fourth teaspoon of freshly ground black pepper.

To prepare, the ingredients are placed into a mixing bowl and whisked until the mixture becomes smooth and creamy. Then, it is refrigerated for at least four hours or overnight. As per the publication, the sauce can be kept in the refrigerator in an airtight container for two to three weeks.

Overall, horseradish has proven its potency as a nutritious vegetable. With its several health benefits, it can be added to many dishes and promote the health and wellness of a person or a family.