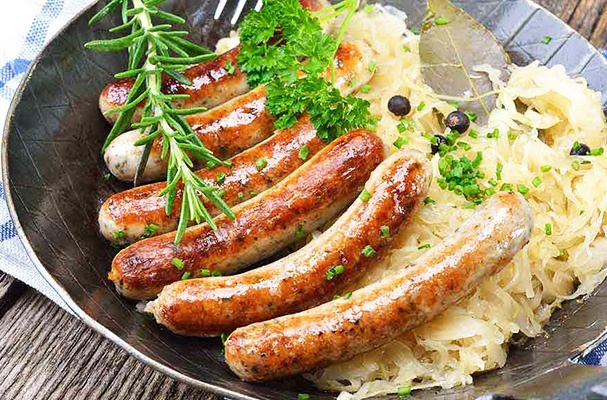 Why You Should Brush with Sea Salt and Baking Soda

Shred that 10 pounds fast with these 8 Steps

Sausage is one of the common meat food sources people eat today. Made from ground meat like beef, pork, and veal, it is usually cooked in various ways like broiling, barbecuing, and pan-frying. Some of them are cooked during processing, with the casing being removed. The following are the health benefits of sausage, along with a sample recipe.

As a meat product, one health benefit of sausage is protein. Protein is one of the three macronutrients, with carbohydrates and fats as the other two. With amino acids as its building blocks, the nutrient is responsible for building and repairing cells and tissues, such as muscle and bone tissue. That is why protein food sources like sausage are called “grow foods;” they help in the growth and development of various organs of the body. Also, protein acts as an energy source when carbohydrate and fat levels go down.

Another health benefit of sausage is iron. Being a meat food source, sausage’s iron helps in the production of hemoglobin, a pigment that gives the red color of the blood cells. According to San Francisco Gate, a serving of sausage gives 1.1 milligrams of iron, which helps achieve the daily recommended intake of 18 milligrams for women and then eight milligrams for men. Consuming adequate iron in the diet also ensures that the body has enough hemoglobin to support red blood cell function.

Eating sausage also helps protect cells and tissues from damage from toxins and free radicals. According to Men’s Health UK, processed pork like sausage is rich in selenium and a hundred grams of it enables one to achieve his daily recommended allowance in one bowl. Along with cellular and tissue protection, selenium also promotes the health of the thyroid gland and the immune system. This is in addition to the dietary fat, which helps digest food and prevent digestive problems.

To prepare, oil is heated in a casserole over a medium heat and the onion and fennel are fried for ten minutes. Next, the garlic is added and cooked for a minute more. Then, the sausage meat is crumbled in and fried for three to four minutes, breaking up with a wooden spoon. After that, the tomatoes are added, along with a tin of water and brought to a boil. Once done, heat is reduced and the ingredients are cooked for 15 minutes. For the dumplings, the flour and parsley are mixed in a bowl with a bit of salt. Then, a well is made in the center and the yogurt is stirred in until dough is formed; it is divided into eight and then rolled into balls very mildly. After that, the dumplings are put on top of the ragu and lid is put on and cooked for 20 minutes or until the dumplings are light and fluffy. Finally, the rest of the parsley and chili are sprinkled.

How to Do a Digital Detox