Vital Matters on Knee Effusion and Effective Home Remedies for It

In layman’s terms, knee effusion is the swelling of the knees. The condition is also referred to at times as water on the knees. It is brought about by the accumulation of fluids in or around the knee joint.

Knee effusion can be brought about by a handful of things. It may occur after a trauma or having the knees overused. It’s not unlikely for it to happen due to an underlying health problem. There are times when a doctor might have to draw sample of the fluid that has accumulated in or around the knee joint in order for the causative factor to be determined.

Removing the fluid present also helps in managing the pain and stiffness, symptoms commonly associated with knee effusion. Right after identifying the cause based on the drawn fluid, a doctor may prescribe the best possible treatment course for the joint problem.

The signs and symptoms of knee effusion are swelling in or around the knee area. It’s not unlikely for somebody with the condition to experience stiffness as the accumulated fluid in the knee area can keep the legs from being bent or straightened completely. Pain is also likely to be experienced by someone with knee effusion.

As mentioned earlier, the condition can be due to several different things. An injury to the knee may cause the condition to happen, such a torn ligament or cartilage. It may also be due to the overuse of the knee or even a fracture in the joint. There are different health problems that may give rise to knee effusion. Some of them include rheumatoid arthritis, osteoarthritis, gout, bursitis, infections, cysts and tumors.

There are different medical treatments available for knee effusion. The best one for the problem depends on the condition’s cause and severity. The right treatment is also dependent on the patient’s medical history.

If an OTC painkiller fails to work against the pain, a doctor may prescribe a stronger drug. Orally taken steroids or the kind injected directly into the knee joint may be prescribed in order to have the inflammation controlled. Other medical treatments may be necessitated in certain instances to have the underlying cause treated. They include arthrocentesis (removal of fluid in the knee joint), arthroscopy (surgical removal of damage tissue or repair damaged ones) and joint replacement in extreme cases.

Home remedies for knee effusion come aplenty. Some of the best ones include:

• Plenty of rest to allow the knee to recover and avoidance of engaging in sports or any strenuous activity
• Placement of an ice pack on the site to reduce the amount of accumulated fluid in the knee
• Propping up the leg on a couple of pillows to elevate the knee and reduce the inflammation
• Use of knee support stockings especially if the cause is osteoarthritis
• Application of compression bandage around the knee to disperse the accumulated fluid
• Avoidance of foods which cause the blood uric acid to increase, in particular if the problem is due to gout
• Weight reduction to relieve the knee from supporting a lot of weight
• Consumption of parsley and celery as they promote the removal of excess body fluid
• Gradually moving the affected knee to promote normal joint movement and reduce stiffness
• Gently exercising the affected leg to strengthen the knee as well as the leg muscles

Walking vs. Running: The Pros and Cons of Each as a Form of Exercise 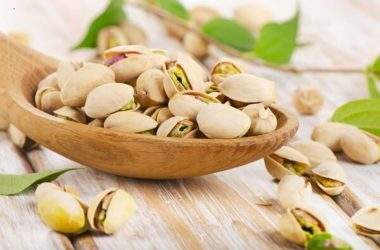 Want to snack on some nuts but afraid of the calories they pack? Then reach for a handful… 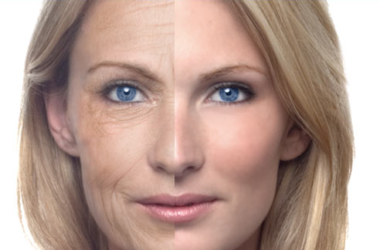 Tips To Get Rid Of Wrinkles on Face 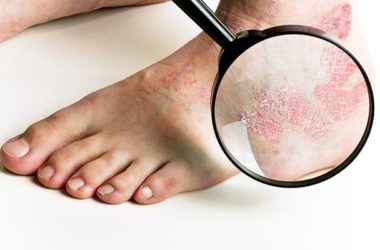 Home Remedies for Psoriasis on Feet

Psoriasis can strike just about any part of your body. However, it can be extra uncomfortable if it…