What to Do When Your Nose Bleeds 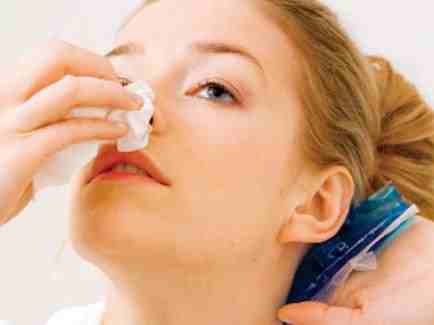 Foods That are Full of Fluoride

Children and adults are prone to getting nose bleeds. The sight of blood may make people panic, but bleeding from the nose isn’t as serious as it seems. The nose has tiny blood vessels that can pop or break due to different causes like sudden change in temperature, irritation from allergies, cold and dry air, a deviated septum, chemical products, blowing your nose too hard and high blood pressure. Worst case scenario: Nose bleeds caused by possible tumors.

What to do when someone gets a nose bleed?

Step 1
• Remain calm. Panicking and shouting is not going to help anybody. Especially in front of children. Children often follow the adult’s reaction in certain situations, if they see you panic, they will eventually panic and associate nosebleeds as something to panic about.
• Sit the person with the nosebleed down and tilt their head back. Doing this will prevent the individual from swallowing their own blood.
• Tell them to breathe through their mouth.

Step 2
• When the individual manages to sit themselves in the proper position, gently squeeze their nose. The soft part of the nose not the septum. Make sure you are blocking the nasal cavities. Keep squeezing for two minutes.
• Gently let go and see if they are still bleeding, if they are, do this step again.

Step 3
• Check every five minutes to see if the nose is still bleeding.
• If it is still bleeding after the second step apply a cold compress on the bridge of the nose. This will stop the blood from flowing.
• Some people cover their nose with gauzes, when you do cover your nose with a gauze remember to leave some space on your nasal passage.

Things to remember
• Do not let the individual lay down during nose bleeds, this allows the person to swallow the blood. The best possible position is to remain seated with their head tilted back.
• Do not let them breathe through their nose or blow their nose after a nosebleed, this can cause the nose to bleed again.
• If bleeding does not stop, go to the clinic or the doctor to control the bleeding.
• Nasal decongestant sprays can be used to control bleeding and close the small veins.
• Go to visit the doctor if the nosebleed doesn’t stop for more than 20 minutes or if you hit your nose and broke it. Get professional help if you sustain a nosebleed after you got a concussion.

If you or someone you know get recurrent nosebleeds, at least once or twice a week without sudden changes in temperature, excessive nose picking or colds. Consult your doctor.