Get to Know Hot Flashes in Men More 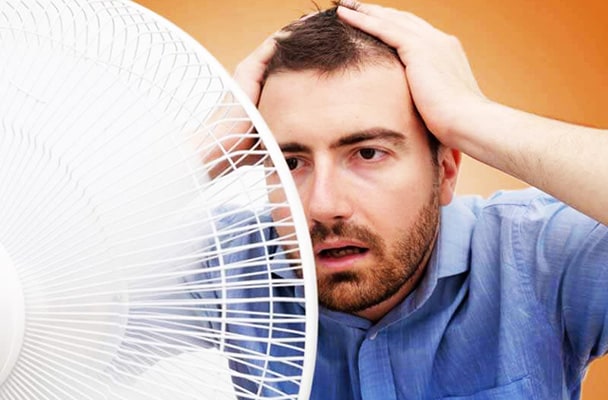 5 Weird Tricks that Can Reduce Itch from Mosquito Bites

Enjoy These Benefits Simply by Drinking Lemon Water in the Morning

A reason why a lot of women have a hard time accepting the fact that they’re already in the menopausal stage is it comes with so many horrible symptoms. According to health authorities, up to 80 percent of menopausal women experience hot flashes — that sudden and often intense feeling of warmth in the face, neck, chest arms and hands that is sometimes accompanied by flushing, sweating, fatigue and heart palpitations.

When hot flashes are mentioned, the image of annoyed and frustrated menopausal women immediately pops into the mind of most people. Not too many of them are aware that men can also get hot flashes.

This article will focus on some of the most important things about hot flashes in men — what their usual causes are and how they can be remedied. So if you’re a male, don’t stop reading now because this concerns you. And don’t forget to share this article on your various social media sites afterwards.

Hormones are the Culprits, Too

Menopause is characterized by a decline in some of the female hormones. So in other words, it causes hormonal imbalance inside the body of a woman. It’s this shift in the levels of hormones within why menopause brings about all kinds of annoying symptoms, including those infamous hot flashes.

Since men have hormones, too, it’s not unlikely for them to suffer from hormonal imbalance just like women.

The reason why hormonal imbalance is commonly associated with women is because there are a lot of moments in the life of a woman when an imbalance in her hormones tends to strike. One example is each time she gets her period. Another is during pregnancy as well as a few weeks or months after giving birth.

As men age, the levels of some of their hormones also drop just like what happens in menopause. But unlike in the case of menopause, the drop is not sharp or sudden — it’s something that happens very slowly.

Most of the time, hot flashes in men are due to certain medical treatments, in particular those that can mess with or alter the levels of hormones inside the body of a male. One example is the so-called androgen deprivation therapy or ADT in which the production of testosterone is restricted in order to stop it from triggering cancer cells to form or multiply. Commonly, it is given to men who are battling prostate cancer.

According to medical authorities, hot flashes in men usually coincide with stuff like mood swings, reduced libido and erectile dysfunction. They say that it’s most likely due to stress, depression or anxiety that these matters can cause.

In menopausal women, the so-called hormone replacement therapy or HRT can help in managing the various associated symptoms, including most especially hot flashes.

Well, a similar kind of treatment may be given to men in order to deal with hot flashes, and it’s referred to as testosterone replacement therapy or TRT. However, not all men who are complaining about hot flashes may undergo the said treatment, including especially those with a history or prostate cancer.

Some doctors prescribe men with antidepressants since hot flashes are sometimes due to mental issues.

There are various home remedies that are said to be effective for dealing with hot flashes. Some common examples are quitting smoking, reducing alcohol intake, minimizing coffee and losing excess pounds.

Sourcelifealth.com
Previous articleEffective Fat Burners for 2019
Next articleHave You Heard About Achalasia? Here’s What You Need to Know About It

How to Make Mangosteen Peel Tea (And Reasons to Drink It)