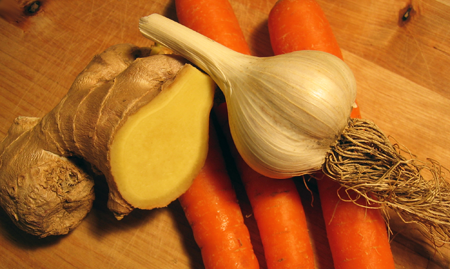 The gastrointestinal track is one hotspot for parasites. Worms as well as microscopic parasites cause pains in the stomach area, dysentery, and vomiting. The list below are home remedies that help you fight and prevent parasite infestation.

Goldenseal
Goldenseal helps in the digestive process. It is also a great antimicrobial agent. Goldenseals can be in the form of a salve, tablet, or powder. They are usually used alongside herbs as it acts as an enhancer to certain herbs. The Berberine eliminates the parasites present in the intestines. Examples of these prasites are pinworms, amoeba histolytica, and giardia lamblia. Liverflukes and pinworms do not stand a chance against goldenseals blended with cloves.

Carrots
Carrots are one of the foods recommended against threadworms. Their Vitamin A and beta-carotene content gives the body the resistance it needs against the larva of thread worms. Carrot juice with honey serves a great deal to help the body against the infections caused by pinworms.

Wormwood
For the treatment of infections caused by the parasites in the intestine, Artemisia annua, or wormwood, is a proven remedy. It is used to treat hyperactive digestive juices. Wormwood tea made from its seeds is a common remedy for tapeworms, roundworms, and hook worms.

Garlic
With its reputation on its side, garlic has been widely used to treat various conditions in the body. Among these conditions are the occurrence of pinworms, round worms, and the giardia lamblia which affects the gut, causing infections in the digestive tract. It is a common reason for the many waterborne diseases that affect cities.

Pumpkin Seed
Amino acids, fatty acids, and carbohydrates, are among the benefits people get from pumpkin seeds. Pumpkin seeds are rich in vitamins and minerals. They also make a good treatment for the roundworms and tapeworms. Ascariasis is a condition caused by round worms. Mashed pumpkin seeds mixed with your fruit juice is a great tonic against the presence of roundworms. Mixed pumpkin seeds and onions with the added flavor of soy milk is another good solution for roundworms.

Parasites have their way of giving the worst amounts of pain and discomfort in the body. The tips above are proven and tested remedies to give you relief in times of the occurrence of intestinal parasites. They also act as great prevention of the existence of parasites in the body. Adding them to your daily diet will keep your stomach, and the rest of your body healthy.