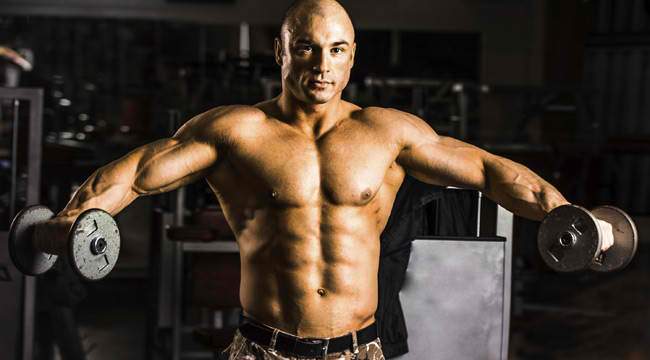 The lateral deltoid muscle, also called the medial deltoid or the middle delts, provides a defined contour to the body by making the shoulders appear broader and the waist appear smaller. Thus, this part of the shoulder complex should be worked out for a V-tapered physique.

The side or lateral dumbbell raise stands as one of the best routines for the shoulder complex, in addition to the rear deltoid dumbbell flyes and the front deltoid raise. It aims to provide isolated workout to the lateral deltoid muscle while the latter two concentrate on the rear deltoid and the front deltoid, respectively. But how is the lateral raise done correctly?

According to Ex Rx, the person prepares to execute the lateral raise by grasping the dumbbells in front of the thighs with the elbow slightly bent. Then, he bends over slightly with hips and knees bent slightly. The person then raises his upper arms to the sides until the elbows are at shoulder height. It is important to take note that the elbows’ height should be maintained above or at the same level as the wrists. Then, the arms are lowered and the movement is repeated.

The lateral dumbbell raise also has a variation called the one-arm lateral raise. It is performed by standing one arm’s length away from a sturdy structure and the right shoulder is turned to the structure, grasping it for support. Then, the left hand holds a dumbbell and the person bends forward a bit from the waist for the left arm to extend down in front of the left hip. Then, the person exhales as he raises the weight to shoulder level and inhales as he gradually returns it to the starting position. This is an alternative to the standard two-arm raise, wherein the elbow is bent approximately ten to 30 degrees at all times.

Lifting very heavy weights with excessive momentum is a wrong way of performing the lateral dumbbell raise. According to Seannal, using heavy weight requires a person to swing his upper body back and forth, which leads to heaving the weights around in an uncontrolled manner. As a result, the stimulation of the side deltoid is reduced and the risk of having shoulder injuries is increased.

Since the shoulder complex is a delicate muscle group, it is also important to warm it up. According to Live Healthy, the person should warm up by performing light cardio exercises for five to ten minutes, along with stretches of all the muscles he plans to work out. To loosen up the shoulders and the upper back, arm swings can be performed, in addition to arm circles. As per the publication, it is not necessary to use heavy weights to have a good shoulder workout, since the lateral dumbbell raise isolates the lateral deltoid. If pain in the shoulders or the upper back is felt during the execution of the lateral raise, it is advised to stop performing the exercise. Also, it is important to contact one’s physician prior to starting any new exercise program.

What You Should Know About Prostate Cancer