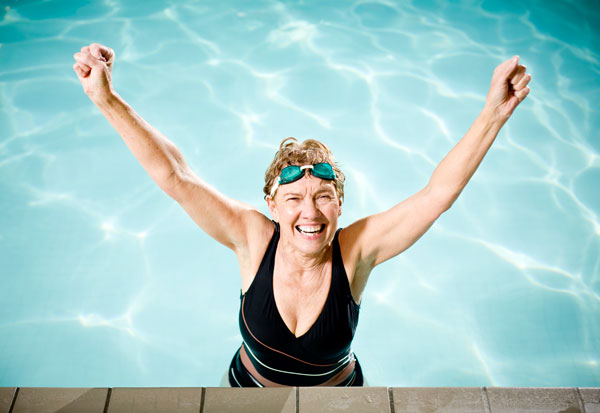 Some people see swimming as a sport and leisure while some people view it as a great and enjoyable way to become physically fit, stay healthy, and may friends. In fact, swimming has a number of physical and mental health benefits that people want to do it for a lifetime.
According to Medicine Net, swimming is a low impact activity. Meaning, there is no ground impact, which can protect the joints from pressure, stress, and strain. The publication also mentioned that the Arthritis Foundation points out the conduct of swimming and aquatic activities all over the country due to this specific health benefit. An example of a good aquatic activity is a water aerobics class, since jumping and hitting the floor of the pool can be done with less force due secondary to buoyancy.

Swimming can also be considered as a form of workout. According to Better Health, swimming is a great workout, since the whole body is moved against the resistance of the water. Physiologically, swimming increases the heart rate of the body, but without increasing the level of stress. It also promotes muscle tone and strength, in addition to a keeping the heart and lungs healthy.

Swimming also adds an individual’s endurance above and below water surface by promoting the function of the respiratory system. Since almost all muscles are using during this activity, swimming can also promote weight loss. This is because a swimmer propels himself through water, which is about 12 times as dense as air; so, each kick and arm stroke counts as a resistance movement, as per How Stuff Works.

Swimming improves one of the body’s locomotion skills, flexibility. According to How Stuff Works, the body is placed in a wide range of motion in swimming. The broad range of motion when the arm strokes are performed, when the leg movement is executed, and when the head and torso turn side to side, keep the joints and ligaments fully functional. In addition, the body is stretched from head to toe when a person does each stroke as he reaches forward. Stretching can be done before and after swimming to maximize the body’s flexibility, in addition to balance in the dense water.

A number of chronic diseases can be prevented through swimming. According to a study (via Web MD, regular swimming is great for both men and women, since it reduces the probability of having heart disease, stroke, and type 2 diabetes by about 535 cases in 100,000 people. The study also found out that swimming decreases the risk of death by about 50 percent in men, as compared to runners, walkers, and those who have sedentary lifestyle. Overall, swimming may help boost one’s life span and save one’s life.

READ  Household Items That Can Double As Exercise Equipment

Swimming also promotes a calm mind. According to Coach Mag, swimming triggers the body to release neurochemicals called endorphins, which increase a person’s sense of well-being. The publication also stated that studies had found that swimming yield the same relaxation effects as yoga, with such calming effects boosted by the stretching and contracting of the muscles. Aside from the release of the endorphins, swimming is also conducive to meditation, as compared to running around a track or cycling on a stationary bike, as per Coach Mag.
Along with mental tranquility, swimming also boosts one’s sleep. According to a poll done by the National Sleep Foundation (via Tesco Living), people who swim reported twice as likely to have a good night’s sleep. Sleep pattern problems, such as insomnia and waking up too early had been least likely to be reported, according to the publication.

Knowing how to swim not only helps a person, but also helps other people as well. It clears the mind of distractive thoughts and promotes optimism in individuals, making them feel worthy and better.

Infused Waters That You Must Try! Absolutely Surprising Health Benefits!