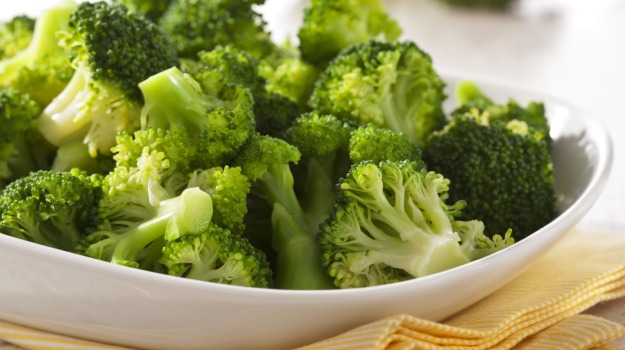 An edible green plant in the cabbage family, broccoli is one of the top sources of protein, the macronutrient that helps build, grow, and repair tissue and cells. In the field of health and wellness, most fitness enthusiasts make broccoli their vegetable of choice when it comes to their diet. Aside from protein, broccoli is also packed with various vitamins and minerals that help the body perform its normal physiologic processes.

Since broccoli is a vegetable, it is fairly simple and fast to prepare. The following are sample broccoli dishes that a person can prepare to improve his overall health and wellness, as well as optimum level of functioning.

Salmon, a type of fish, is usually paired up with broccoli in various dishes like salad. In this recipe, broccoli is braised for it to be cooked well and it joins the pan-seared salmon topped with pine nuts, raisins, and sauteed onions. According to Eating Well, the ingredients include one and one-fourth pounds of skinned salmon fillet (cut into four portions), two trimmed heads of one to one and a half pounds of broccoli, a tablespoon of chopped fresh rosemary (or a teaspoon if dried), a teaspoon of salt, one and a half tablespoons of extra-virgin olive oil, one diced small onion, three tablespoons raisins, two tablespoons pine nuts, and half cup water.

To prepare, the salmon is seasoned with half the rosemary and half teaspoon salt for at least 20 minutes and up to an hour prior to cooking. Then, the broccoli is cut into florets with at least two-inch-long stalks. After that, the outer layer of the stalk is removed with a vegetable peeler. Take note that the florets are cut in half lengthwise. In a large saucepan, a tablespoon of oil is heated over medium heat. Then, the onion is added, stirred occasionally, and cooked for three to four minutes until translucent. After that, the remaining rosemary, pine nuts, and raisins are added and tossed to coat with oil. The ingredients are stirred and cooked for three to five minutes until the pine nuts become aromatic and brown in color. Then, the broccoli is added to the mix, along with the remaining half teaspoon salt, and then tossed to mix. Water follows to bring the mixture to a boil. Once done, heat is reduced to preserve a mild simmer; it is stirred occasionally and is cooked for about eight to ten minutes until the water has nearly evaporated.

The remaining half tablespoon of oil is heated in a large nonstick skillet over medium-high heat. Then, the skinned-side-up salmon is added and cooked for three to five minutes until golden brown. After that, the fish is turned over and the pan is removed from the heat and is allowed to stand for three to five minutes more until just cooked through. The broccoli is divided among plates and the dish is topped with pine nuts, salmon and spoon raisins, and the drippings in the pan.

Lemon adds zest to a dish; thus, a recipe like the roasted garlic lemon broccoli provides people a unique citrus taste. Toss the broccoli florets in olive oil, roast it after, sprinkle with garlic, salt, and pepper. According to All Recipes, the ingredients include two heads of brocccoli (separated into florets), half teaspoon of lemon juice, two teaspoons of extra-virgin olive oil, a teaspoon of sea salt, half teaspoon of ground black pepper, and minced clove garlic.

The dish is prepared by heating the overn to 200 degrees Celsius. Then, the broccoli florets are tossed along with the extra virgin olive oil, salt, pepper, and garlic in a huge bowl. After that, the broccoli is spread out in an even layer on a baking sheet. Once done, the ingredients are baked in the preheated oven for about 15 to 20 minutes, until the florets are tender enough to pierce the stems with a fork. Then, they are removed and transferred to a serving platter. Finally, the lemon juice is squeezed over the broccoli prior to serving.

Along with broccoli, other excellent sources of protein include eggs, chicken, peanut, and milk. Also, maximum health is achieved with proper nutrition, regular exercise, and adequate rest.

Previous articleThe Back Squat: How To Perform Properly And Safely
Next article3 Exercises for Bigger Triceps